What is Systems Ethics? 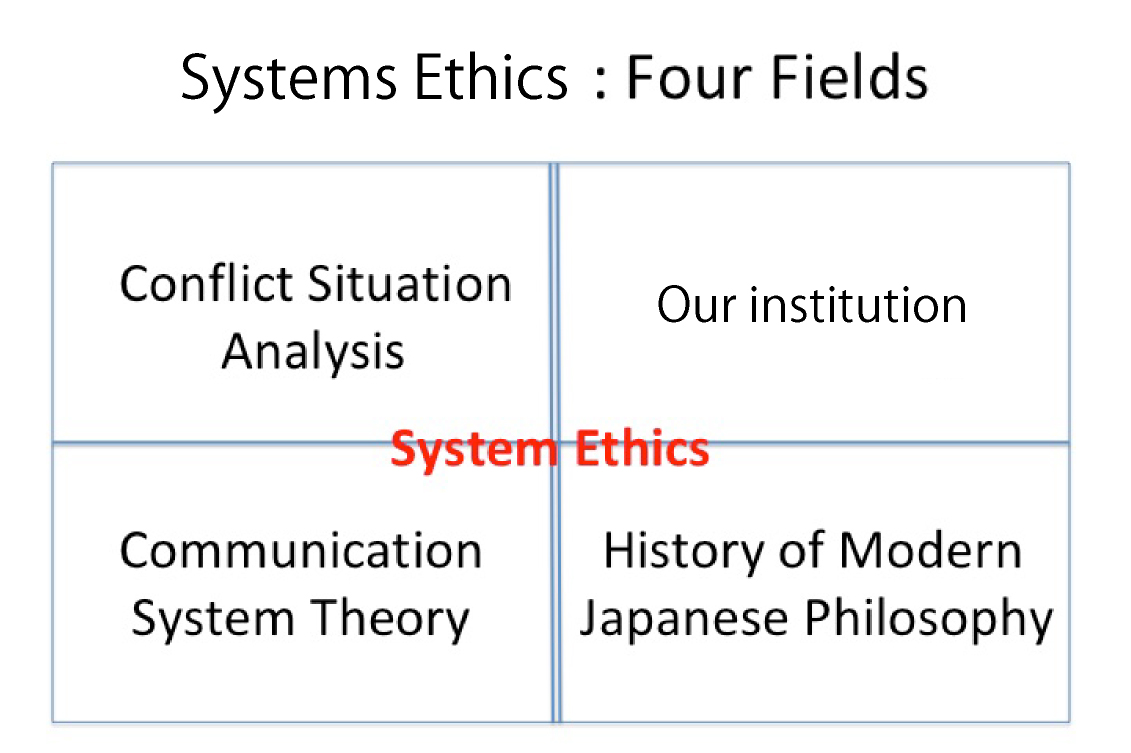 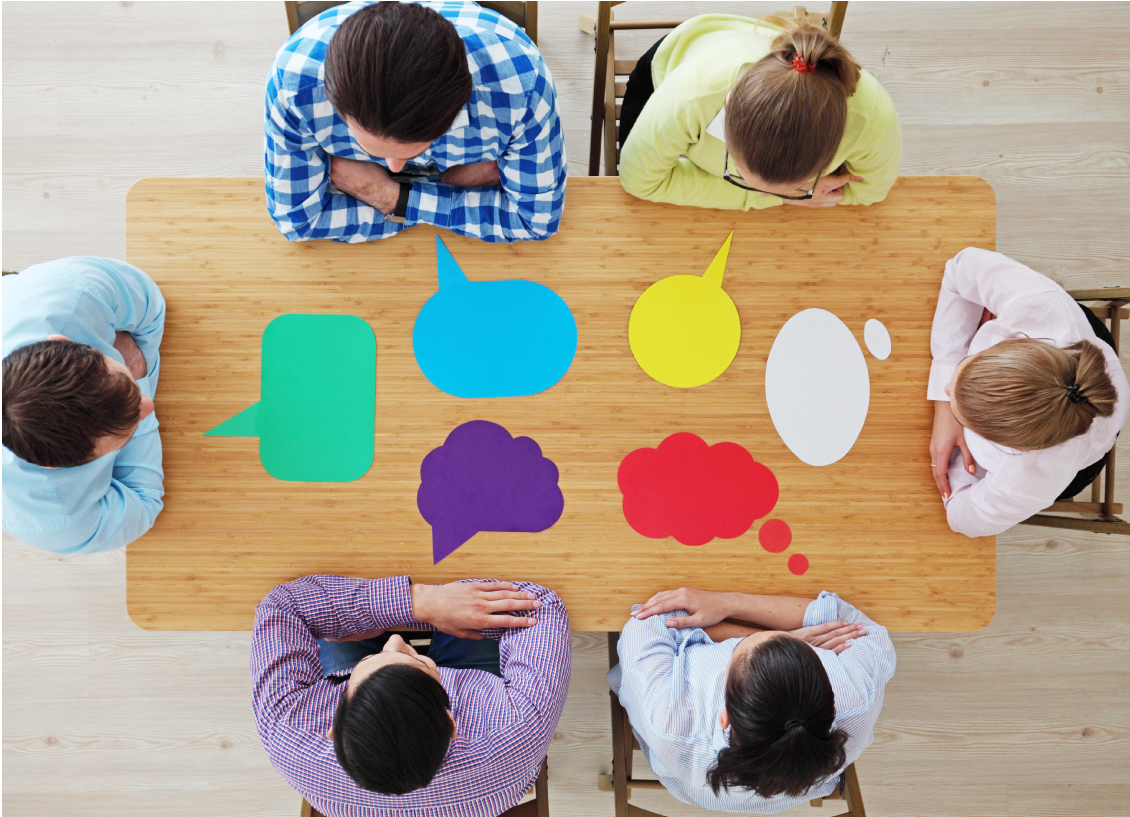 1. The viewpoint of view of Structuring to bring inclusiveness to ethics

The relationship of every thing is communication as long as something (munus) is exchanged (communus) there. In the case of human communication, what is exchanged is interpretation of meaning, which circulates in four stages.

The first feature is that Systems Ethics can inclusively grasp diverse phenomena related to the so-called “ethics”.

"Ethics" involves all things related to humans: not only the way of personal life and the trust relationship but also the order of group, the principle of organization, the whole society idea and the trend of the times. Moreover “ethics” also relates to all the regions such as economy, social relationship, public and culture.

The past ethical theories have normatively discussed the individuals’ virtues and the ideal relationships. On the other hand, Systems Ethics introduces distinctions and linkages in an isomorphic manner after capturing all ethical phenomena. What makes this possible? "The Structuring of Communication System" does. 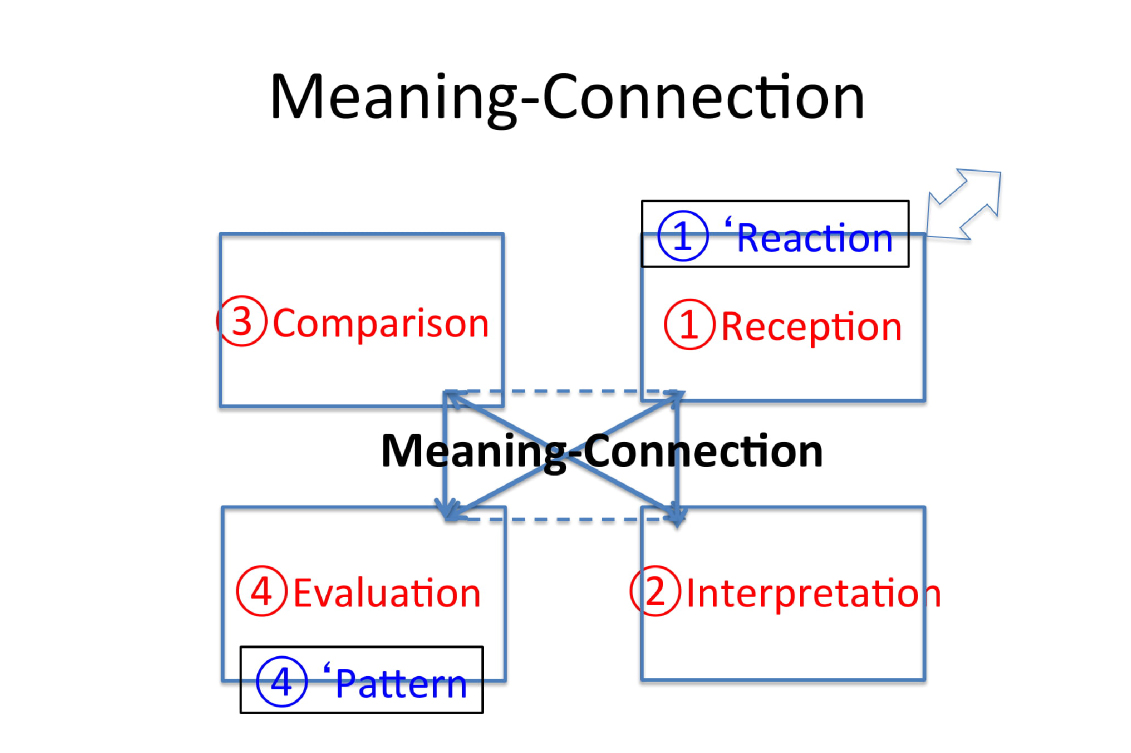 The function of meaning-connection is called Structuring. And the whole process of communication maintained by Structuring is named System.

In Systems Ethics, "Rin" of "Rin-ri" (literally "the situation like people lined up in order") corresponds to the Communication System, and "Ri" (literally lines and paths) corresponds to Structuring. Thus, for example, the self-question and the self-answer in the individual inside is communication, and the "belief" maintaining it as a System is Structuring. Similarly, a group of people has also a network of communications and the customs and conventions to maintain it as a System become Structuring. 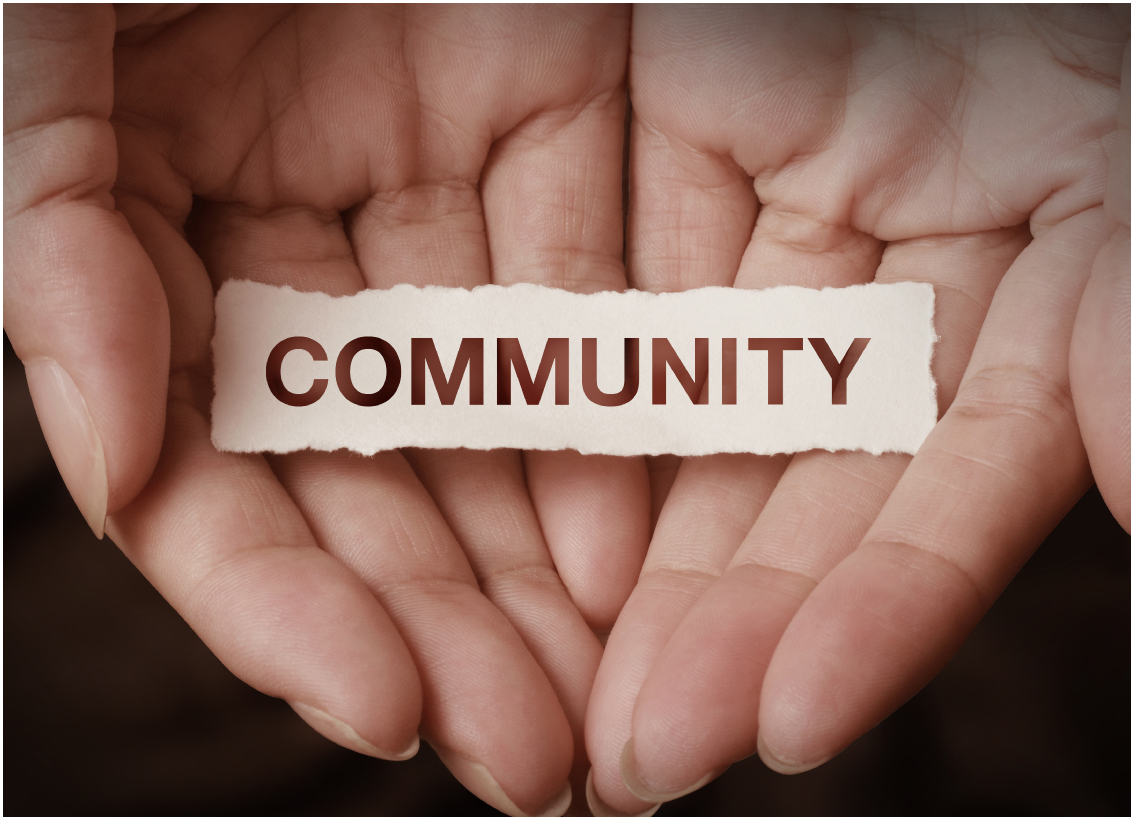 The second feature is that Systems Ethics can grasp the complex reality of ethical phenomena with new perspective, Four-Division of Structuring. 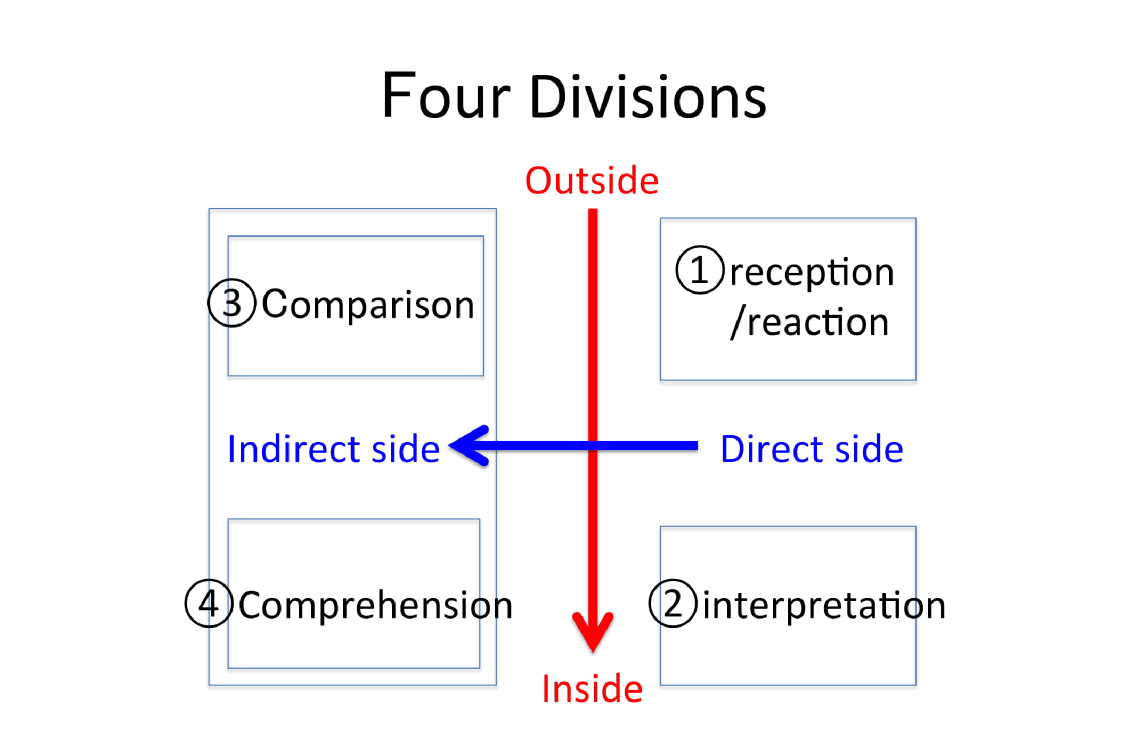 If this two-story of two-axis (four-division) is projected on a plane, there emerges Four Function Diagram. 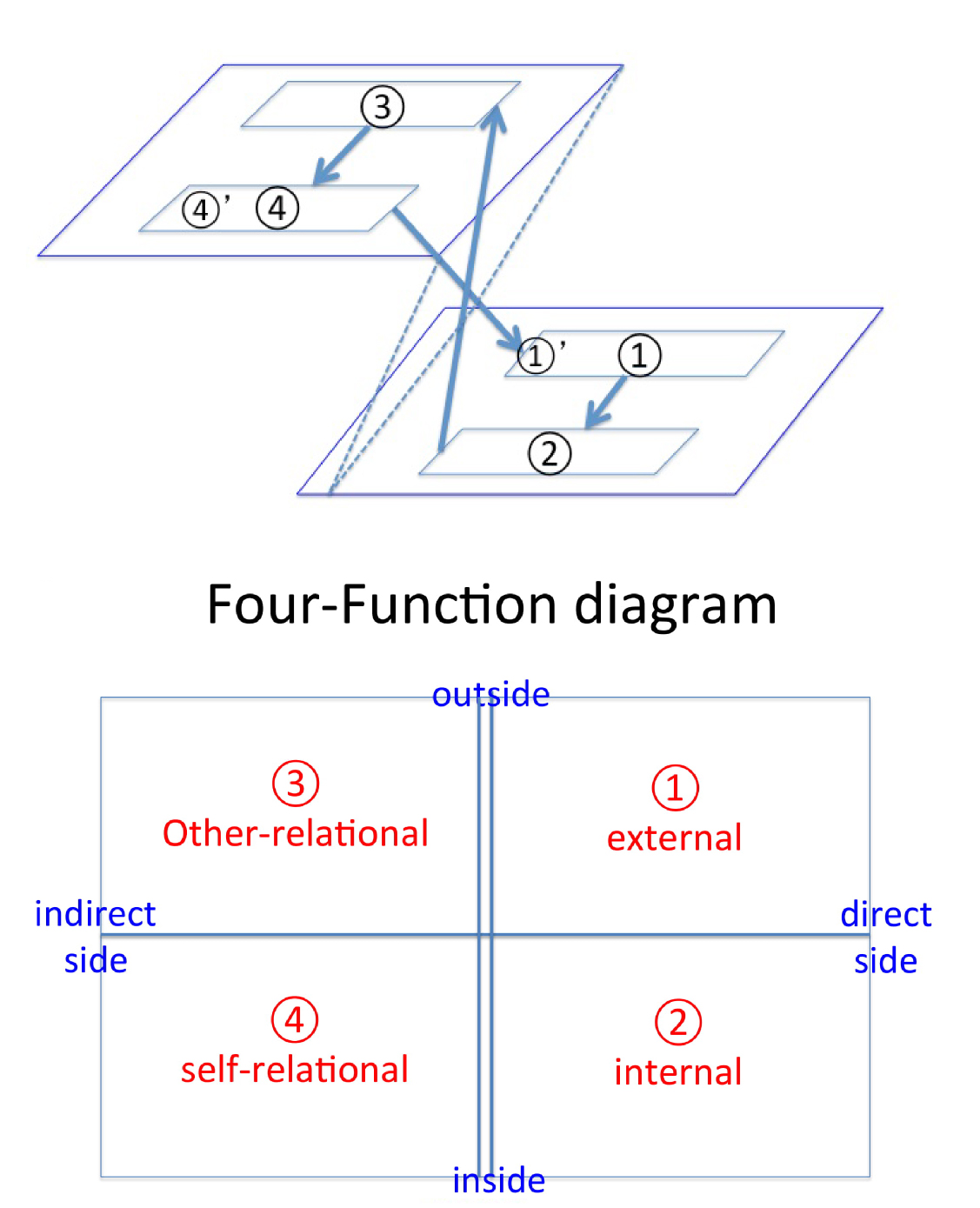 Let us reconstruct the human meaning world with Four-Function Diagram. First, each inside of the parties involved in communication, in order to correspond to the four-stage process, becomes four dimensions, such as action, emotion, negotiation and introspection. 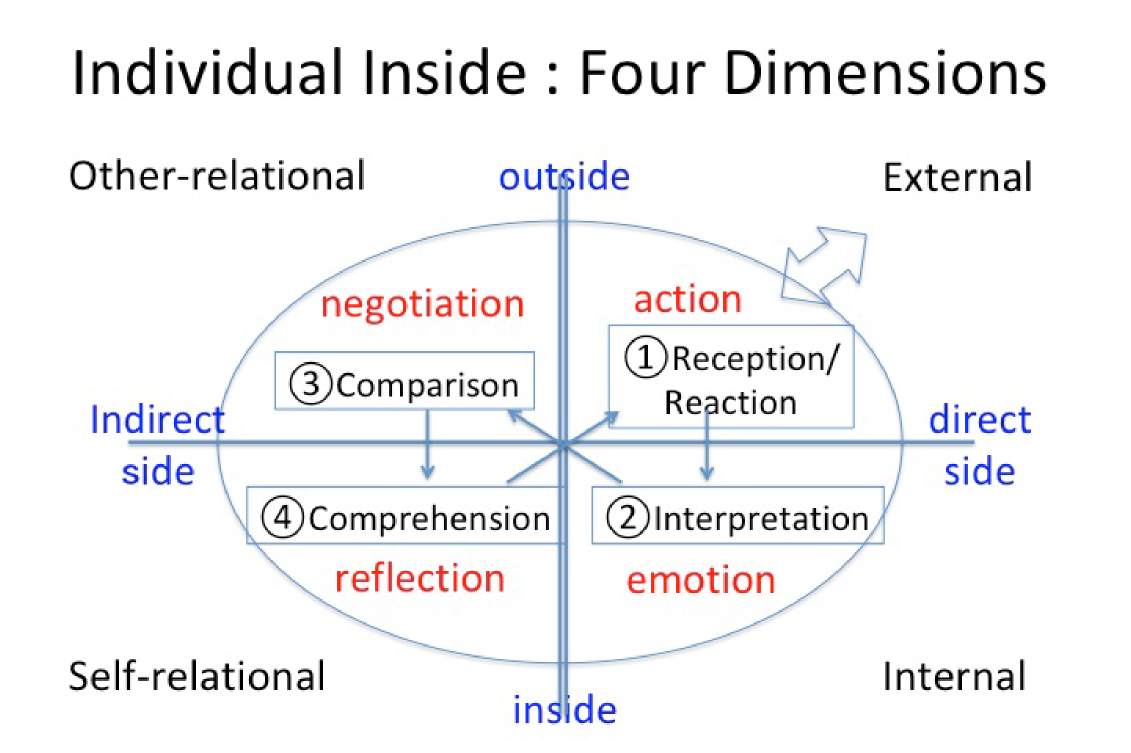 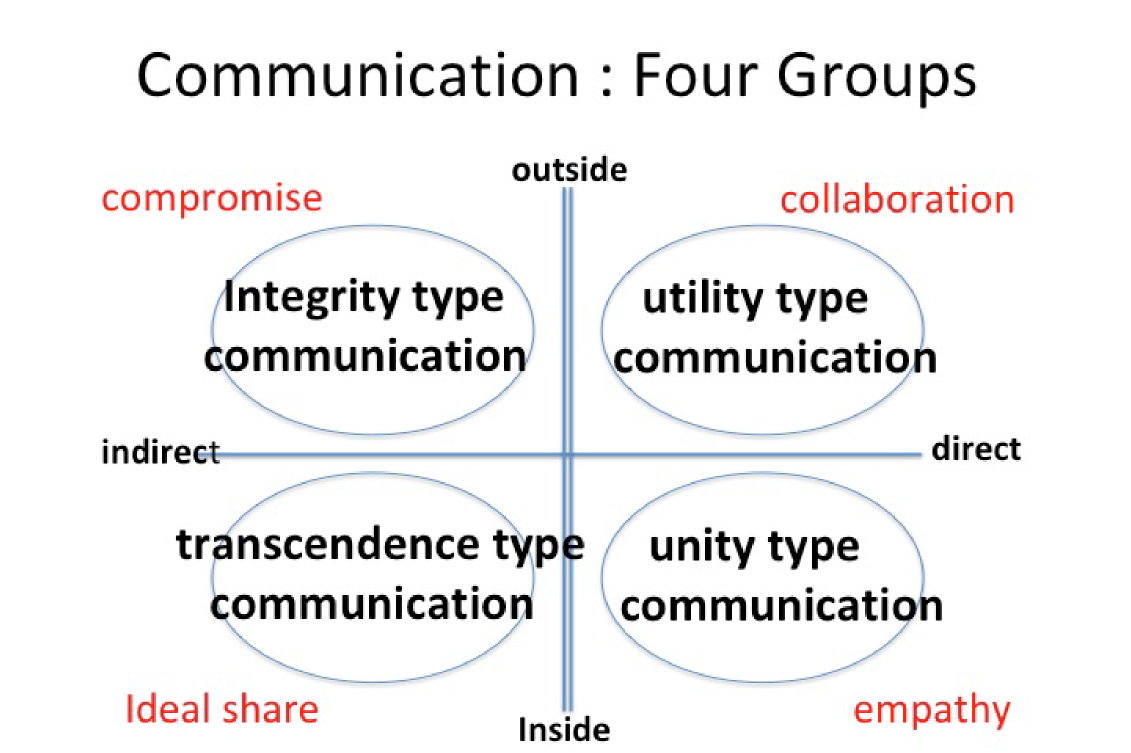 Finally, on the basis of communication groups, Social Systems with limited purposes are separated. Corresponding to the four groups, social systems become four regions of ①economy, ②society in the narrow sense, ③public and ④culture. 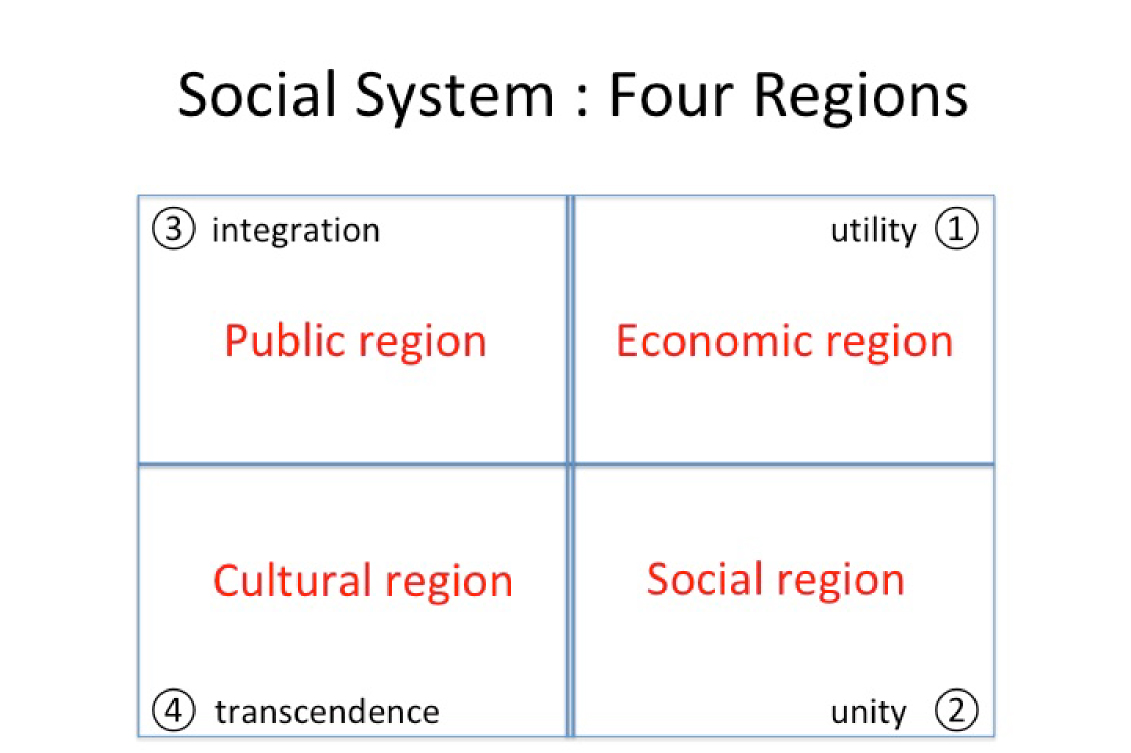 The interior of these four regions is further divided into sixteen fields. They are as followings: the economy contains industry, technology, market and daily life; the society contains welfare, healthcare, childcare/nursing care and education; the public contains administration, public opinion, politics and law; and the culture contains play, art/sports, science, philosophy/religion. That is linked to form the whole society. 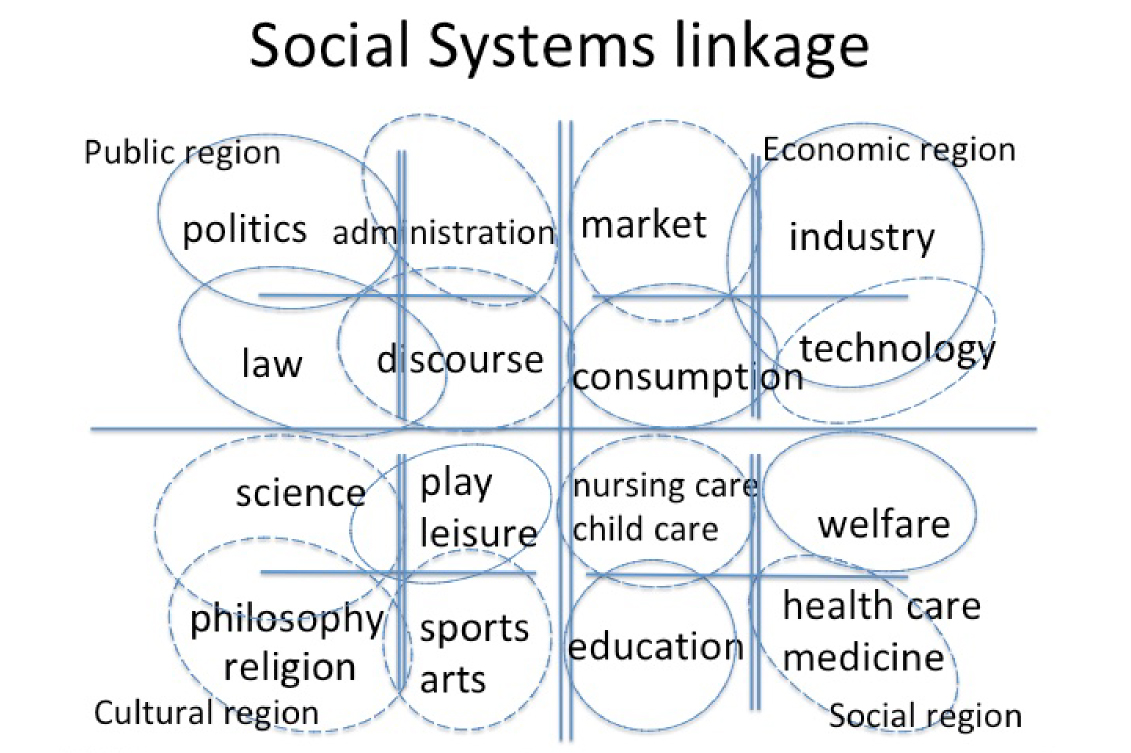 In the past ethical theories, communications and communities have been identified just only as the unity type, and ethics has been viewed as contradiction with economy, politics or culture. Systems Ethics can make it possible with the method of Four-Function Diagram to distinguish and associate the complex meaning world of human beings, including the distinction between Social Systems and Communities. 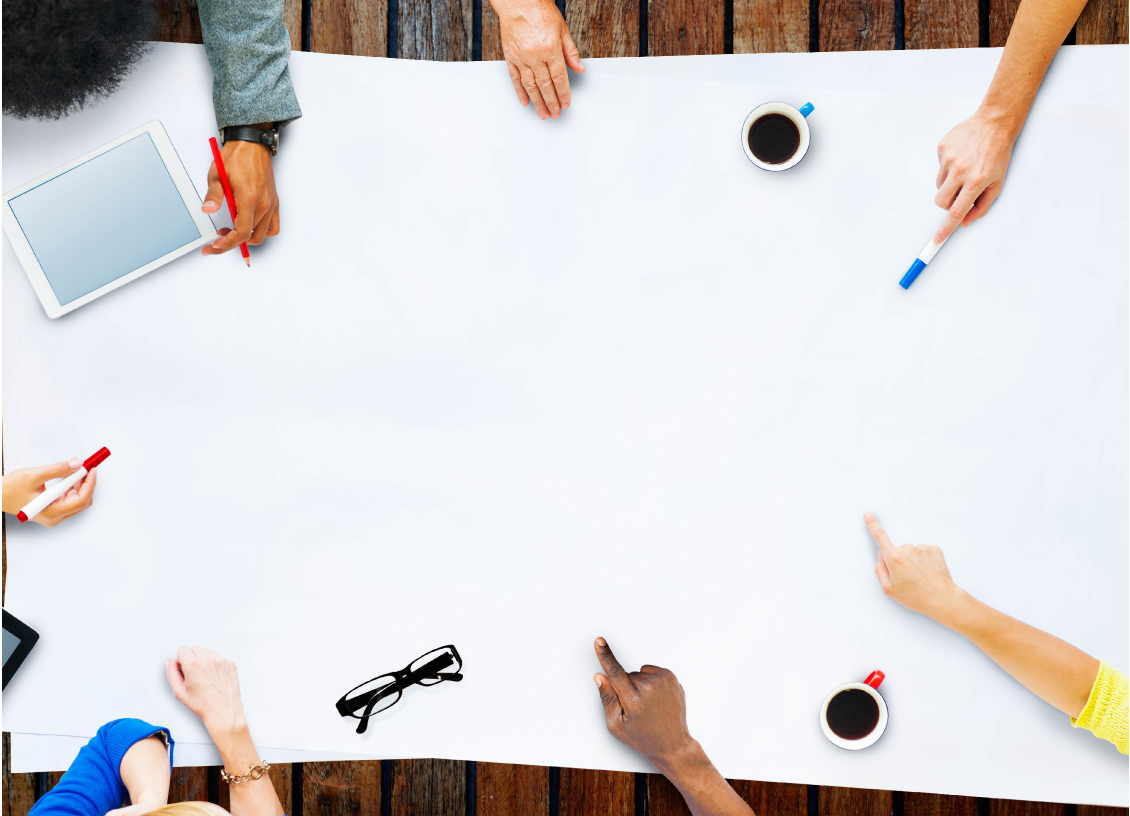 3.Both-sided Parallel Model to aim for the movement of conflicts

In actual communication, conflicts arise from differences in the perspectives of the parties concerned. It is a Both-sided Parallel Model that sets the movement, the realistic goal, not the disappearance of the conflict. The methodology that combines Both-sided Parallel model and Four-function diagram is Issue-Configuration Approach.

The third feature is that Systems Ethics can realistically respond to the situation of conflicts among the parties concerned. 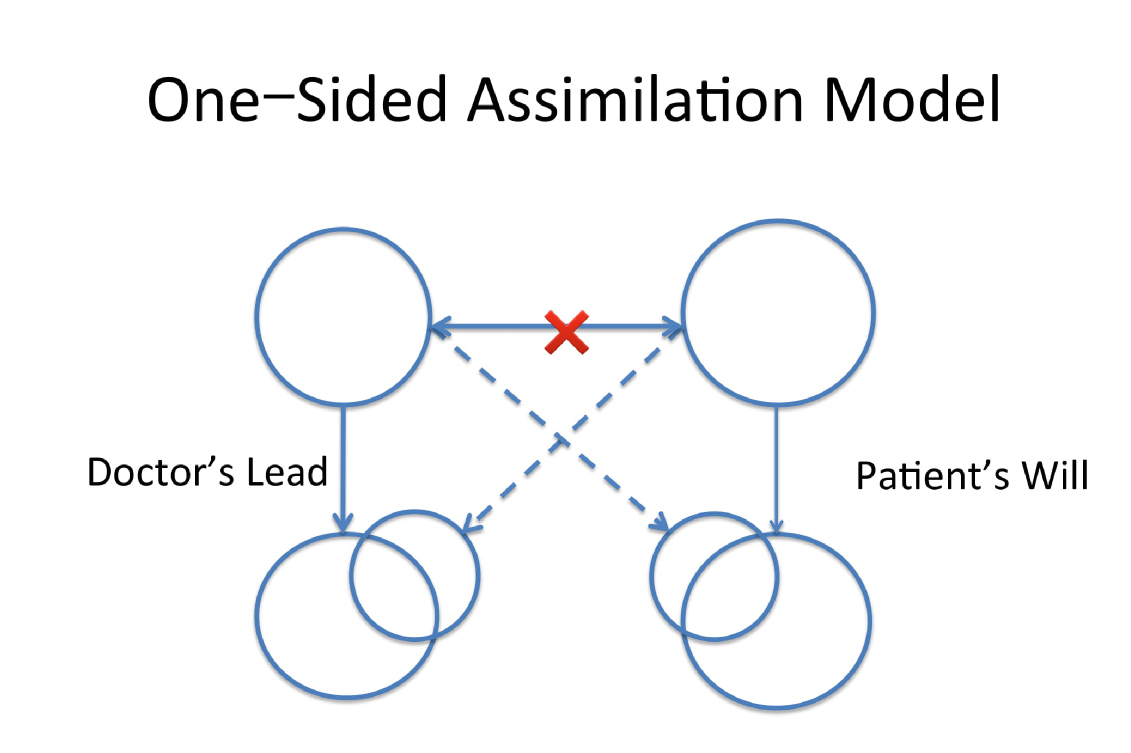 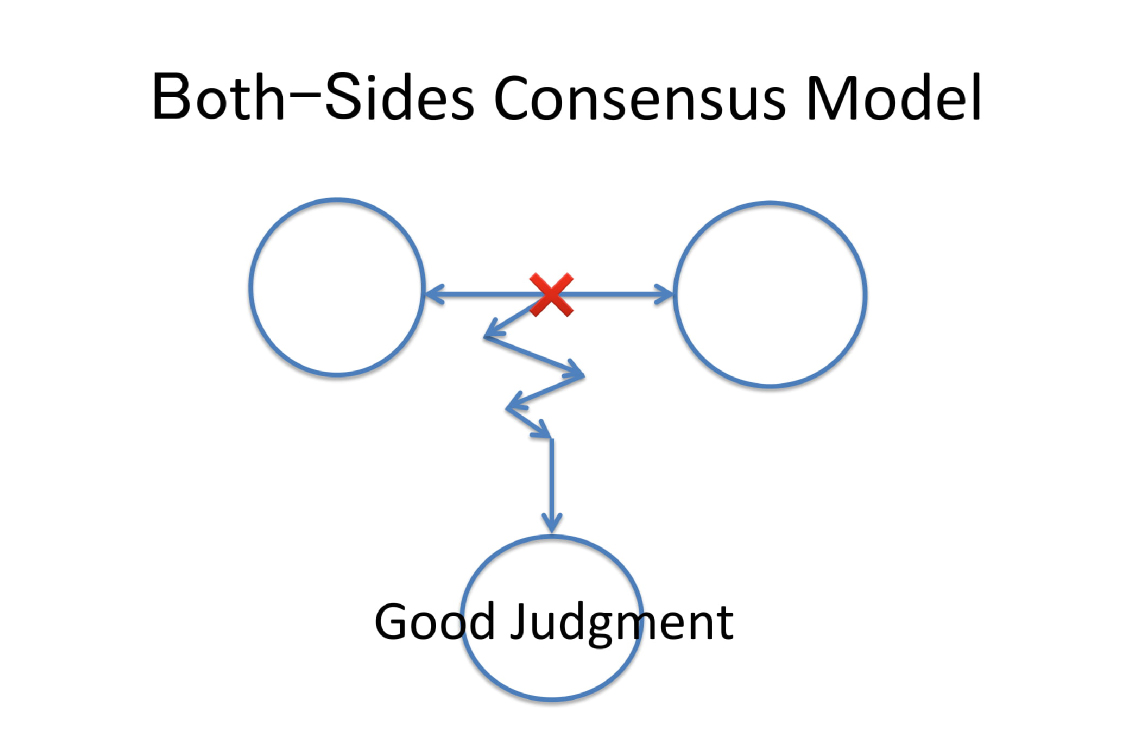 Systems Ethics newly advocates Both-Sided Parallel Model. This model emphasizes the differences between the perspectives of the parties concerned, and aims to the movement of conflicts rather than their elimination. Both sides interpret the outside information by themselves and, if necessary, transform themselves. Self-transformation would be further promoted if all conflicting issues leading to a conflicting situation are associated and summarized. This way of collecting issue points is called Issue-Configuration Approach. 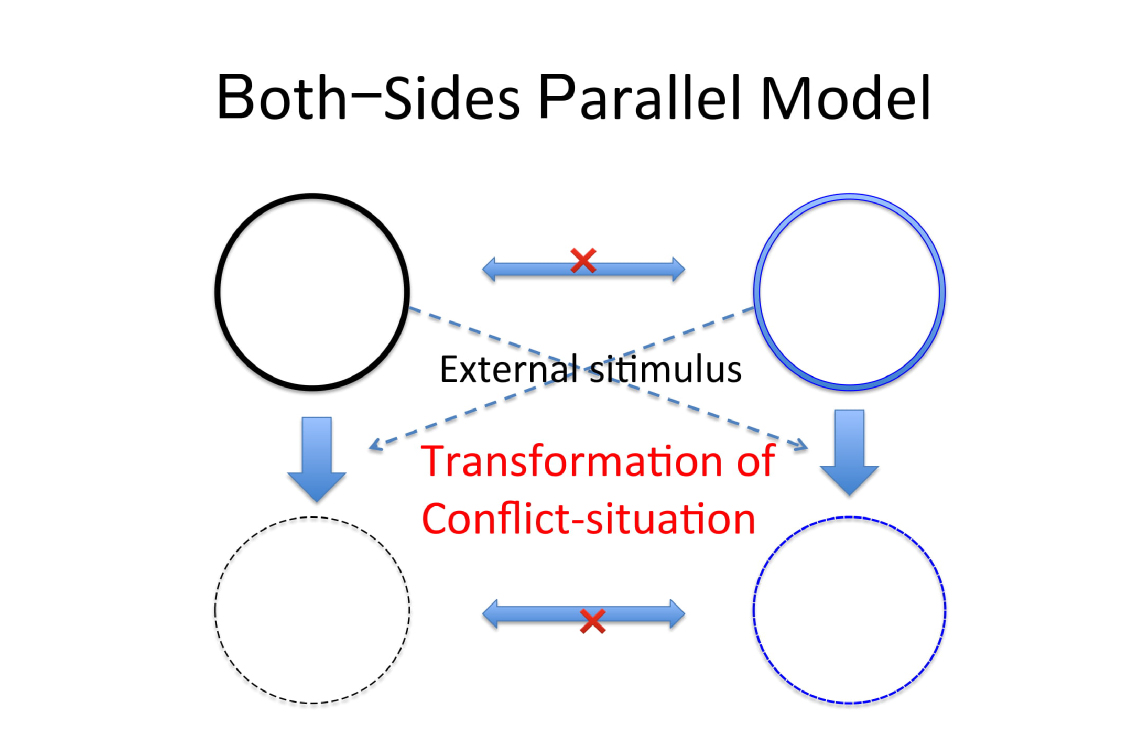 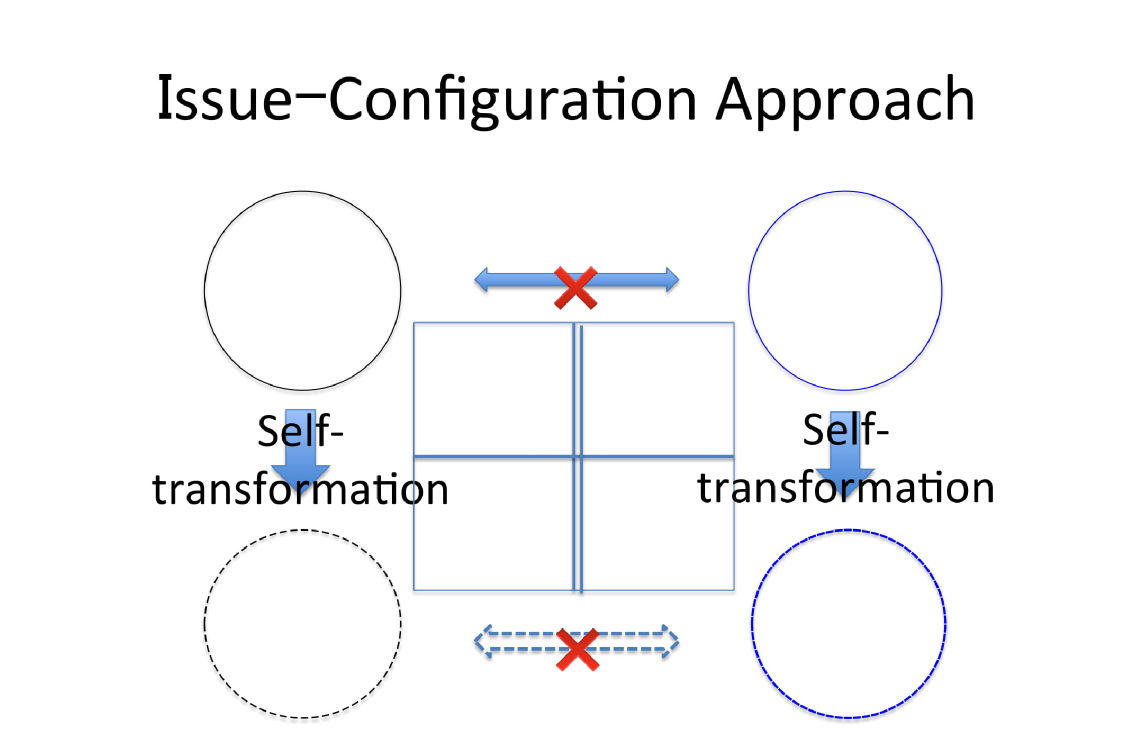 A general framework of Issue-Configuration is constituted a series of conflict points according to the Four-Function Diagram. This framework is the overlap of three concentric circles: the four regions of social system, the four groups of communication and the individual's four dimensions. With this framework in the background, analyzing a specific context, a specific issue-configuration will emerge. 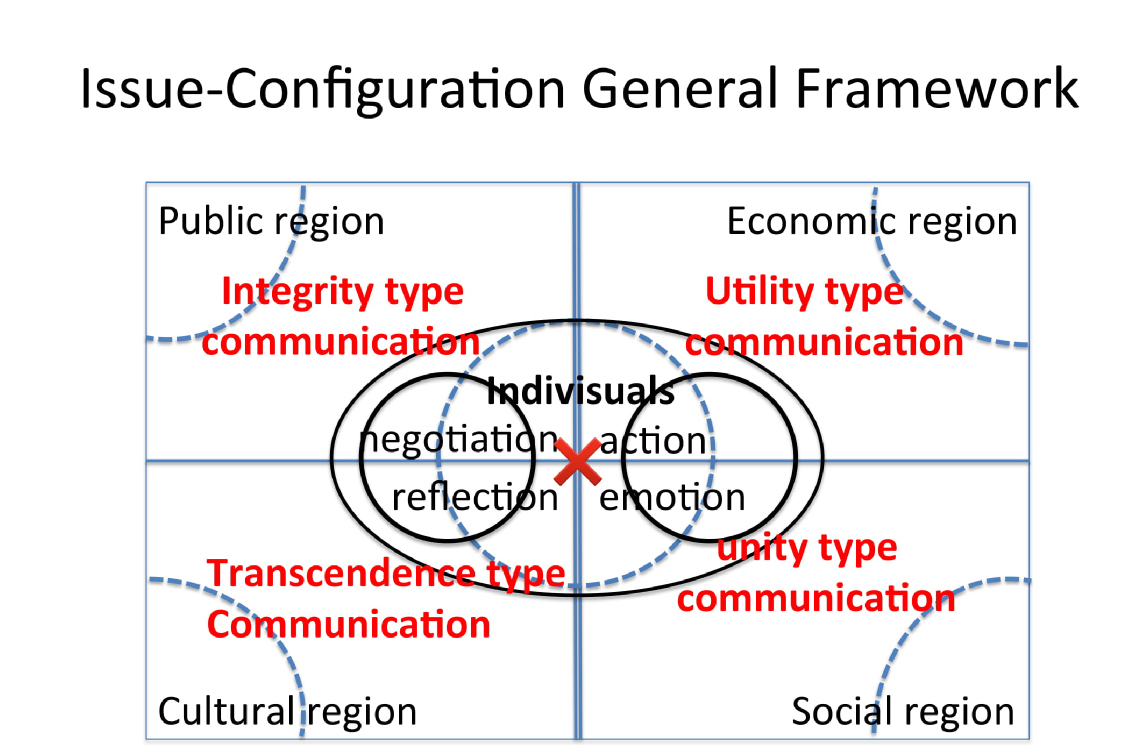 In the Both-Sided Parallel Model, the parties concerned place the specific issue-configuration on a table. As the parties face each other, the four-step process emerges, such as ①clarification of issues, ②recognition of different perspectives, ③understanding of biases of issues, and ④restoration of balance. If this process circulates well, the stuck conflicting relationship will begin to move. 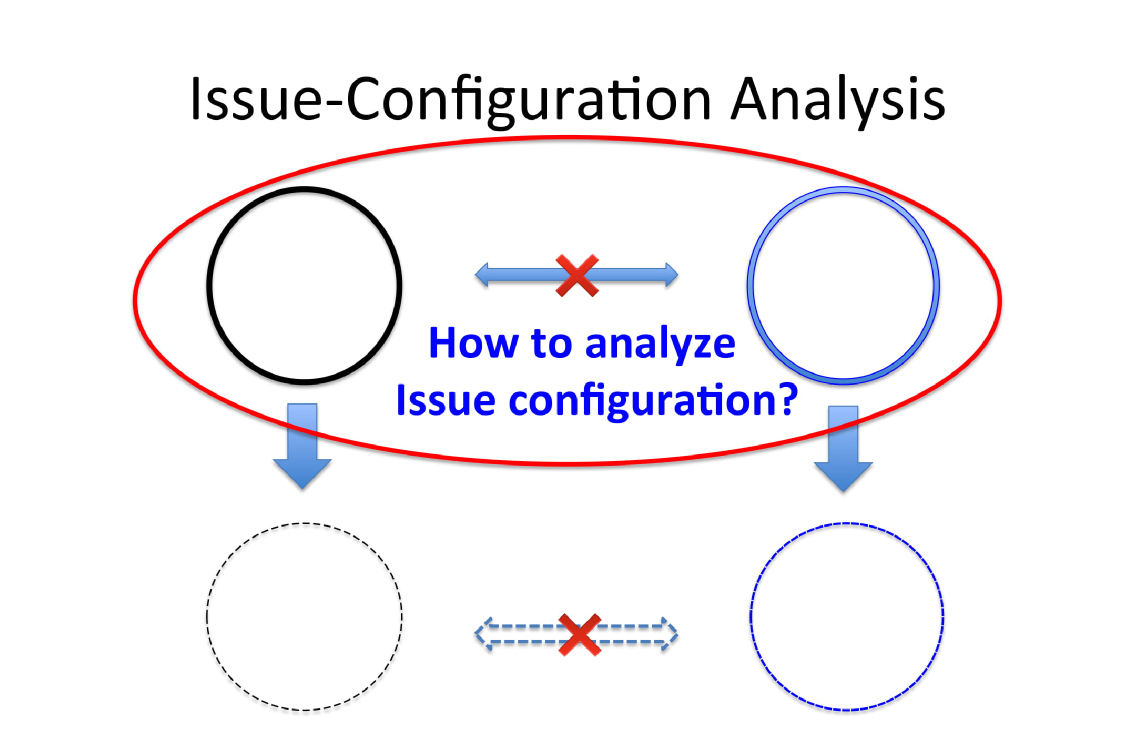 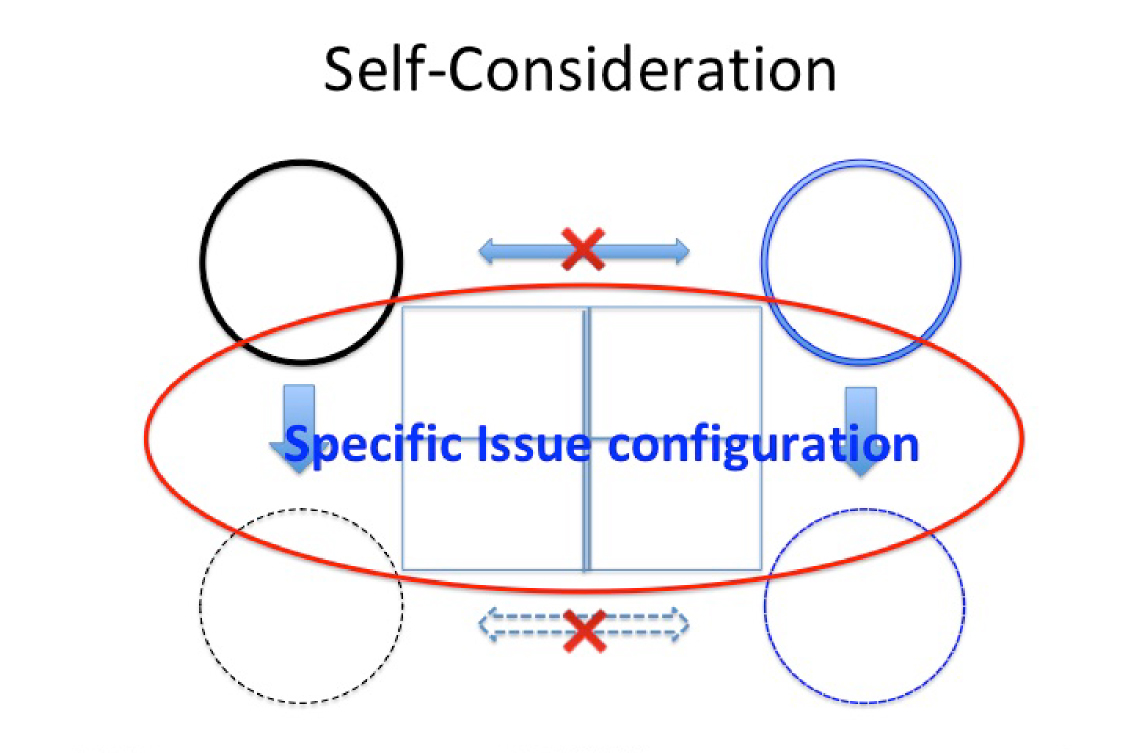 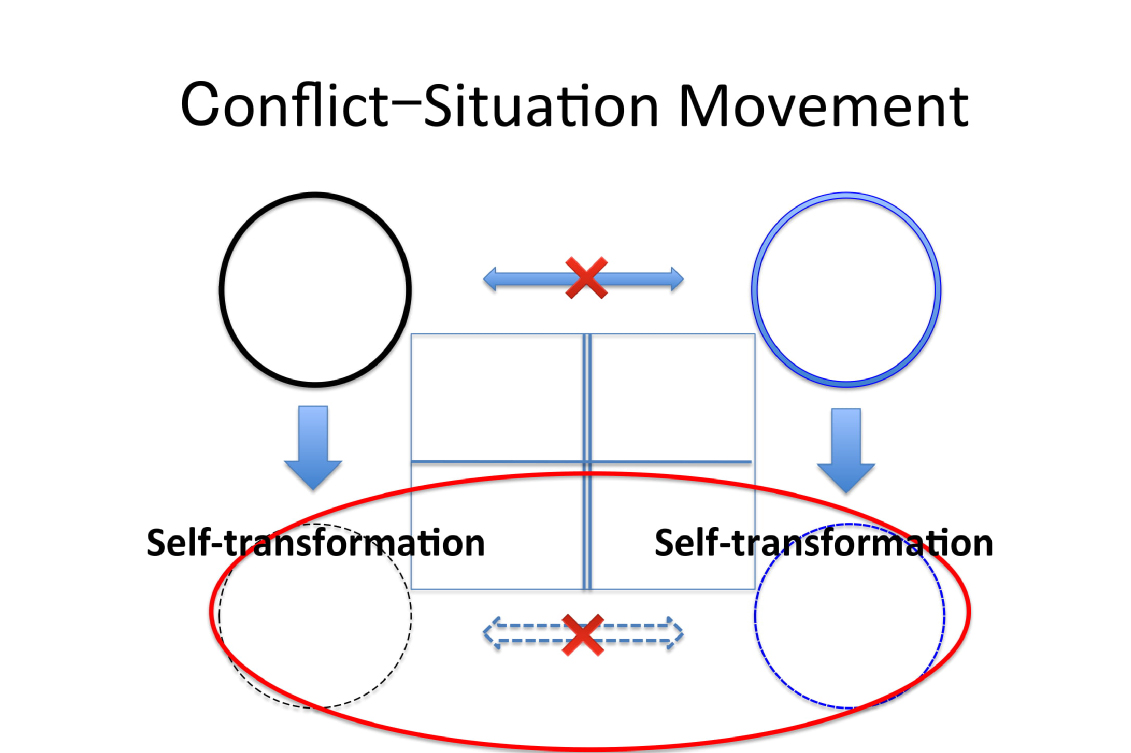 So far, three features of Systems Ethics have been explained. What to be emphasized in particular is Four-Function Diagram. This diagram is useful as a tool to analyze conflict-situations in various fields. For example, it makes possible to reconstruct the QOL scales, the scientific basis of the social security system and apply them to nursing care.


Our institution, based on Systems Ethics, focuses the way of life of the elderly and the way of Re-Ageing Society in the digital age. As for the detailed contents of Systems Ethics, please refer to my book in preparation. Once published, this website will inform of it. 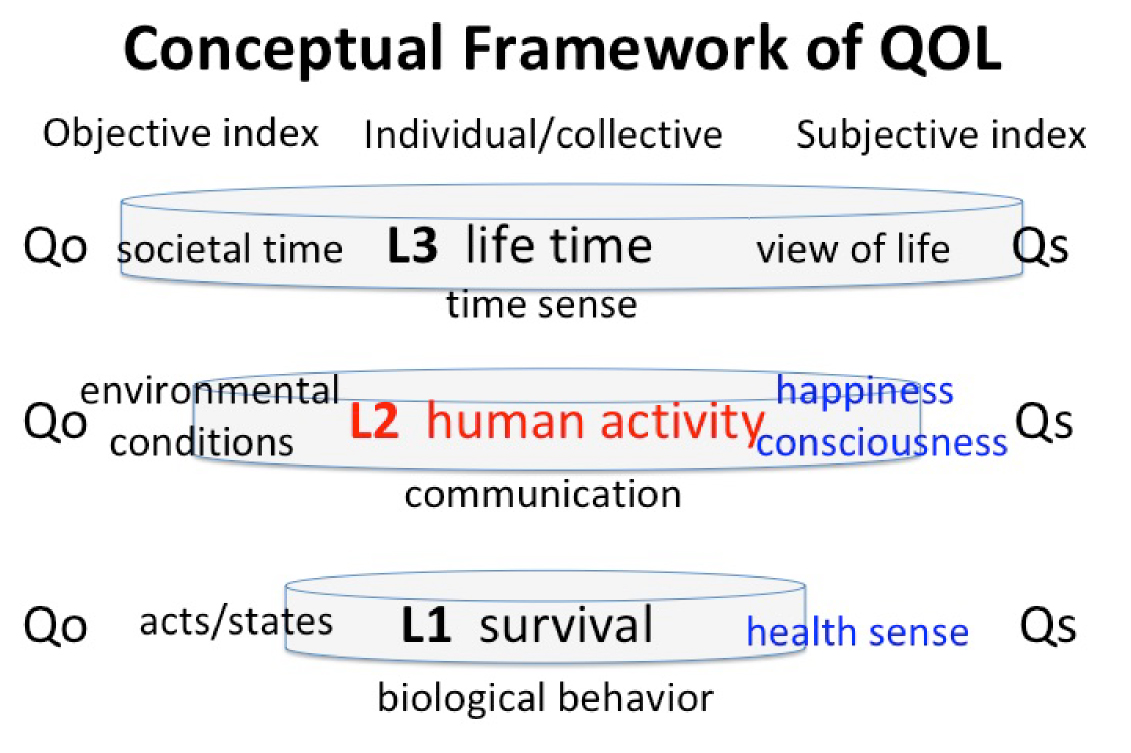 Our institution, based on Systems Ethics, focuses the way of life of the elderly and the way of Re-Ageing Society in the digital age. As for the detailed contents of Systems Ethics, please refer to my book in preparation. Once published, this website will inform of it.